Energy 101: Why do we need to fracture anyway?

This is the first in a series of blog postings on the Lifecycle of Oil and Natural Gas based on the certification course offered through The University of Colorado's School of Global Energy Management.

Why do we need to fracture rock to retrieve oil and gas?


The answer lies in where oil and gas is found – sedimentary rocks.  Sedimentary rocks are rocks that comprise different sediments like pieces of other rocks, shell material, and salts.  Sandstone, limestone and shale are sedimentary rocks.  The key to sedimentary rocks is how they formed.  Over time, sediments were deposited in basins and layers of sediments built on top of each other, resulting in thick accumulations of sediments.  Tens of thousands of feet of sediments accumulated in some basins and the weight caused grains to compact, realign and break.  Compaction, combined with pressure and fluids moving through sediment deposits worked to cement in between grains to form sedimentary rock.
Although the rock is compacted and cemented together, the rock comprises sediments of different shapes that don’t fit together perfectly.  These irregular shapes create holes or pores in the rocks.  These pores house water, oil and gas.  Permeability is a measure of the rock’s capacity to move fluids through the pores.  The more porous a rock is, the easier it is to move fluid.  For example, in the photo below. 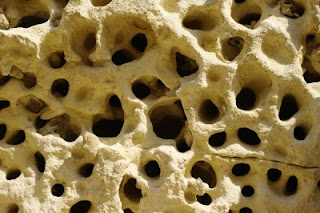 On the other hand, the smaller the pieces of the sedimentary rock, the closer these pieces can be compacted and the smaller the pores and channels for fluid removal.  Shale, for example, has tiny pores and the connections between the pores are also tiny.  Introducing open fractures, however, dramatically increases permeability.  Fractures are artificially induced in wells to increase the production rate and ultimate recovery of gas and oil from shale rock.  For example, see the picture of shale rock below. 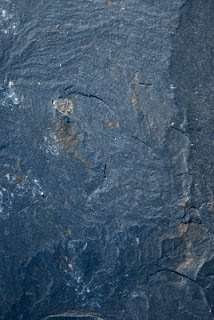 Shale Rock
What types of sedimentary rocks are geologists looking for?
The two rocks of interest are reservoir rock and source rock.  Reservoir rocks have the ability to store fluid and transmit the fluid held within pores in economic volumes.  That is, these rocks are porous and permeable, for example, sandstones and carbonates.  Source rocks comprise fine grained sediments that contain organic material that can become oil and gas.  These rocks have tiny pores and low permeability, for example, shale rock.


America's rich oil shale deposits likely hold 1.5 trillion barrels of oil, according to Jack Dyni, a geologist emeritus at the U.S. Geological Survey. According to the Rocky Mountain Energy Forum, “that amount is 4 times the proven reserves of Saudi Arabia. And, it’s greater than all 12 OPEC countries combined, which have proven reserves of about 911 billion barrels of oil.”  To put it another way, “Colorado, Utah and Wyoming have as much oil as Saudi Arabia, Iran, Iraq, Venezuela, Nigeria, Kuwait, Libya, Angola, Algeria, Indonesia, Qatar and the United Arab Emirates combined.”
Oil and gas are less dense than water so as oil and gas generates within the sedimentary rocks in the basin it moves upward through fracture and pore systems until something stops or “traps” it.  A trap is an impermeable layer of rock that surrounds a permeable rock, either vertically or laterally.  One type of trap is a structural trap.  In this mechanism, an impermeable rock seals the oil and gas trapping it so it can’t escape.  Another type of trap is a fault trap.  In this mechanism, the plates in the earth shift up or down displacing reservoir rock against impermeable rock so that the oil and gas can’t escape.  Geologists can locate these traps and drill to access the trapped oil and gas.


How did the oil and gas get there?
Although a common misconception, oil and gas does not originate from dinosaurs.  Plant matter and planktonic organisms were deposited over time in deep oceans, swamps and lakes.  These deposits are made of organic carbon molecules containing carbon and hydrogen or hydrocarbons.  Organic carbon exposed to high temperatures for a long period of time will yield oil and/or natural gas depending on the temperatures.  The type of hydrocarbon produced depends on the type of organic matter that was deposited.


The role of the geologist, petrophysicist and geophysicist is a critical component in identifying and validating resource plays.   With technology, these experts can identify areas of potential interest and characterize the reservoirs geometry, continuity and variability.  The data collected is used to develop drilling plans and select locations.  In the next posting we’ll walk you through the process involved in identifying the next big play.  Stand by!
Image credit: www.123rf.com
Posted by Rocky Mountain Energy Blog at 11:15 AM

Rocky Mountain Energy Blog
New technology, diverse energy resources and grid solutions can help redefine our energy landscape. Kelly de la Torre’s practice focuses on getting client's results by: finding solutions to market and regulatory barriers to energy development and for emerging technologies, by working with her client's to identify market opportunities and bring together the right parties and legal support to take advantage of those market opportunities. By understanding the energy landscape and understanding the client's objectives, Kelly can help companies design strategies to achieve their objectives within the existing statutory and regulatory framework and advocate for changes if necessary. Kelly has a B.S. in biochemistry and an M.S. in chemistry both from the University of New Mexico and a J.D. from the Rutgers-Camden School of Law in New Jersey. She is licensed to practice in New Mexico and Colorado and is a member of the U.S. Patent Bar.